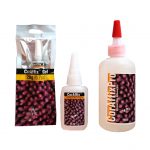 Please log in if you wish to see your current Reef Bucks total.